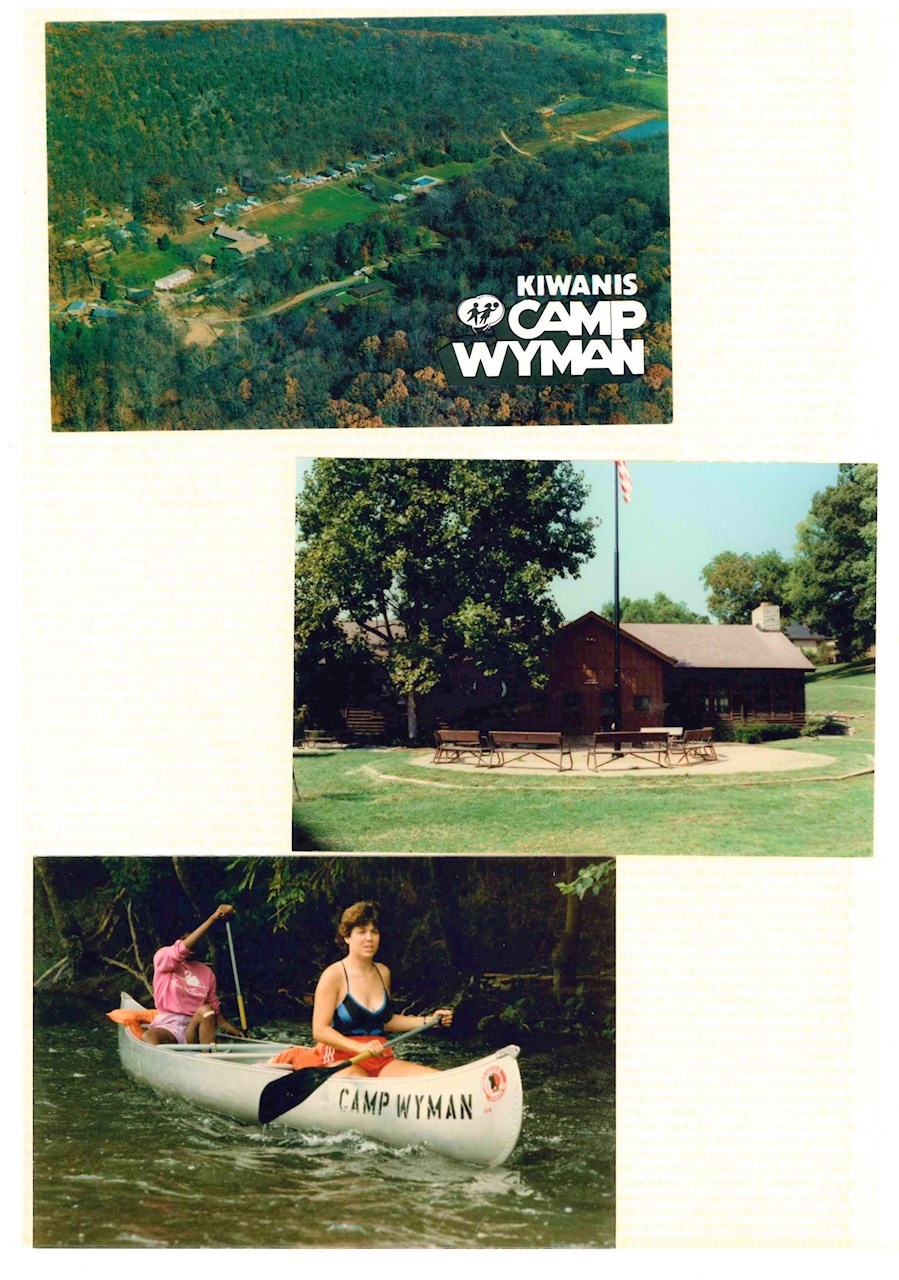 Founded as the Children’s Industrial Farm in 1897, the original concept was to be an orphanage for the homeless children of St. Louis aged 4 to 12. “Industrial Farm” refers to the Boy’s Town style institution where children learn agricultural skills and raise some of their own food. Incorporated as The Children’s Industrial Farm Benevolent Association of St Louis, the enterprise was modeled on the “Fresh Air” movements in New York, Michigan, New Jersey, and other states.

The farm was funded by subscriptions from 500 St. Louis families. The advisory board included well known names such as Adolphus Busch, William J. Lemp, and R.M. Scruggs. As was typical of the fresh air movement, many early benefactors were leaders in the region’s wholesale food and beverage industry (thus the ties to agriculture). Albert Russell Verdier was the man behind the idea. In the news, he is listed as secretary. A committee was formed to find a location for the farm.

Frank Wyman served as president of the Children’s Industrial Farm from at least 1902 until his death on April 24, 1924. He and his wife are buried in Bellfontaine Cemetery in St. Louis. (His obituary and photo are posted on Findagrave.) Known for his fund-raising, Wyman was a prominent businessman who was appointed Postmaster of the St. Louis Post Office 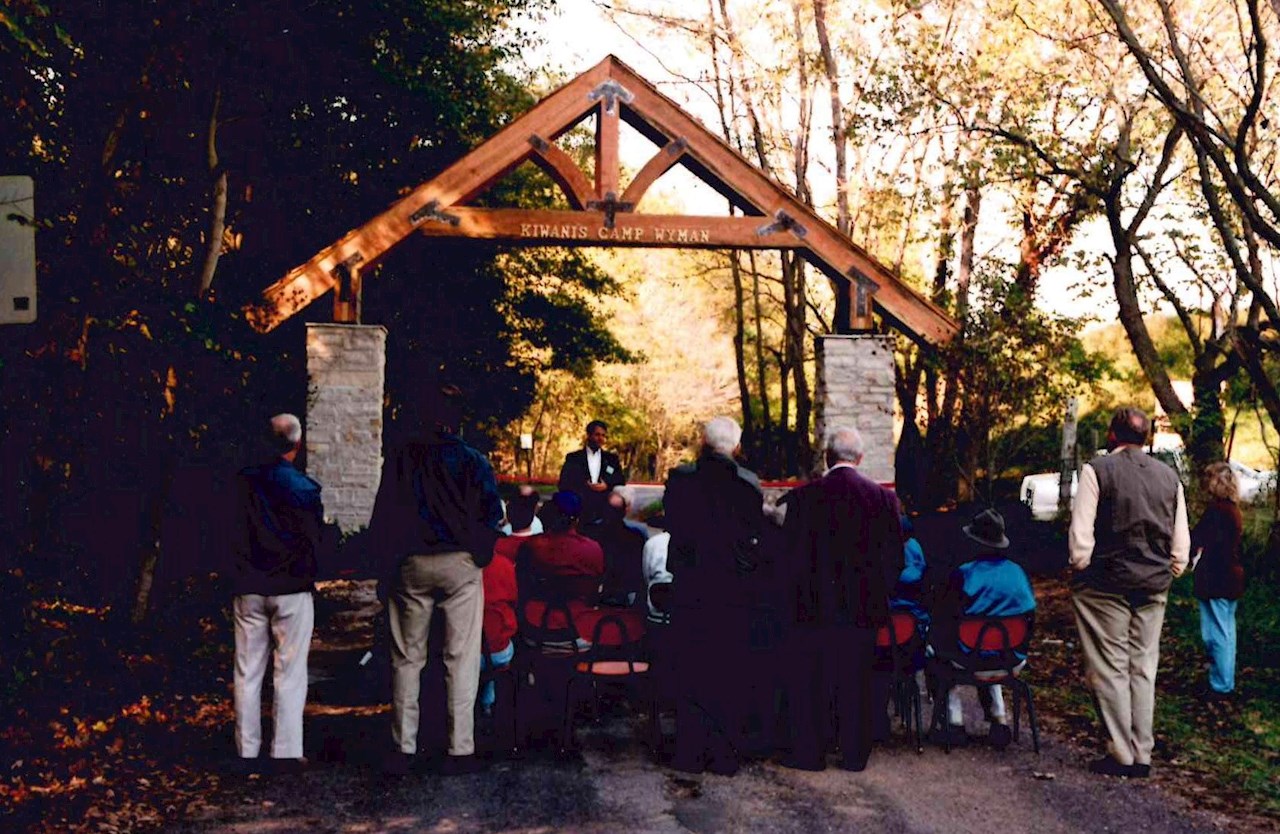 during the administration of Theodore Roosevelt. He served from 1903 to 1909, including through the St. Louis World’s Fair.

Some reports indicate the “farm” was first located near Sullivan, MO, but in 1900 was moved to a rented farm near Eureka (purchased in 1910). A full page article in the 1902 Post-Dispatch shows photos of early buildings. The orphanage concept, which was never implemented, transitioned to providing summer “outings” for children. For 10 weeks each summer, groups of 100 children were brought to the camp, usually by rail, for two-week visits. Included were boys and girls from ages 6 through 12 from low-income areas, sent on referral by churches and social welfare
organizations. The “farm” raised most of its vegetables; milk cows were rented from local farmers. 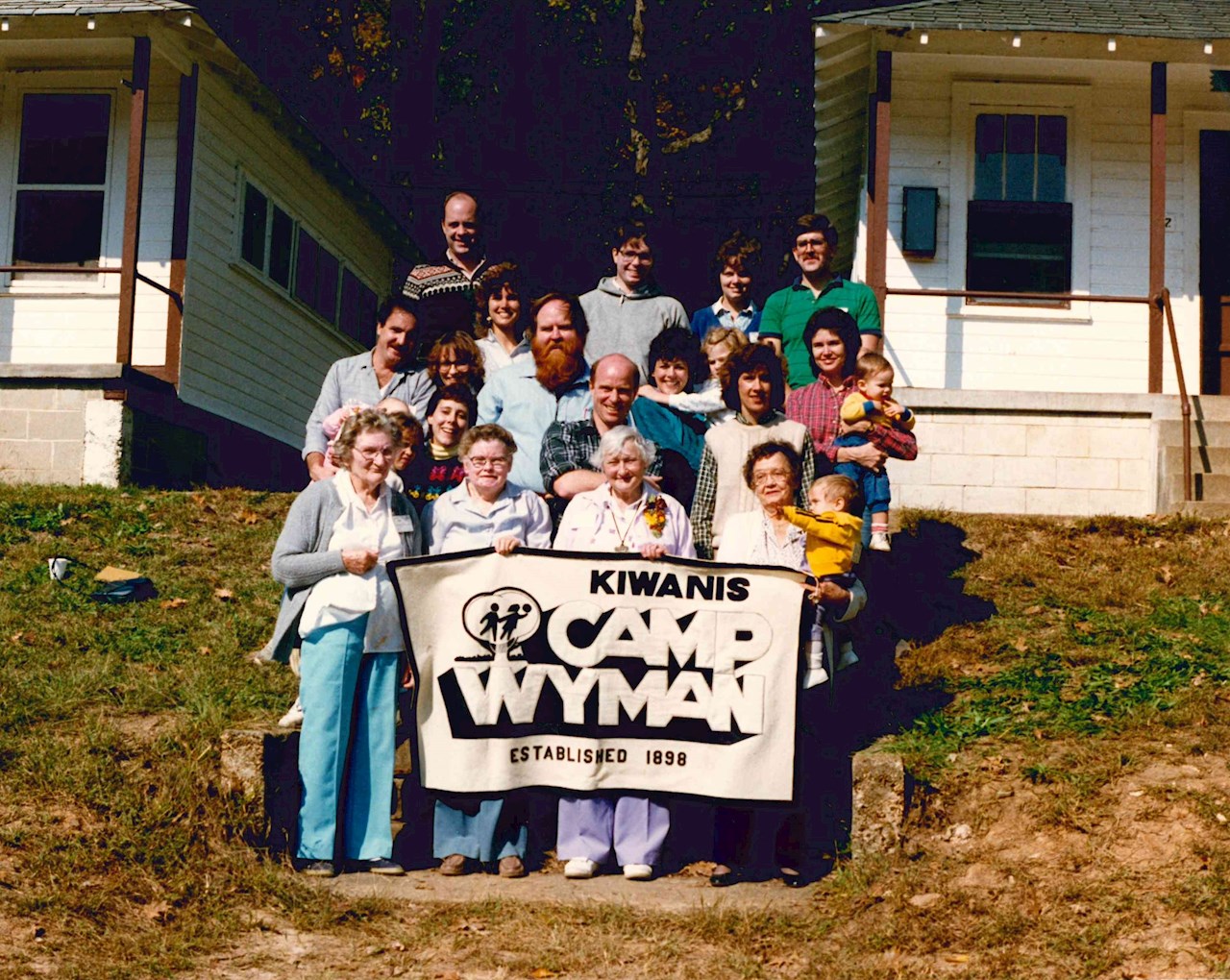 Lodging for children and staff was in canvas tents until 1910. Then sixteen cabins were built with scrap lumber from the 1904 World’s Fair (thanks to Frank Wyman’s connections). These lasted until the late 20’s when they were replaced by larger, better ventilated dorms. Built of pine clapboard and painted white they stood all in a row like a city block.

The organization’s name has evolved over time. It became the Eureka Outing Farm in 1921, then Frank Wyman’s Outing Farm for Children, Camp Wyman in 1942, and Kiwanis Camp Wyman in 1975. The final name change to Wyman Center, dba WYMAN, in the 1990’s, occurred with the expansion of the organization’s mission to include both the camp and community programming. Concurrently, a board resolution was approved to honor the historic relationship with Kiwanis, perpetually naming the campsite near Eureka as Kiwanis Camp Wyman.

It is not clear how original subscription funding worked, but by 1922, Frank
Wyman’s Outing Farm was one of the charities funded by the St. Louis Community Fund. The funding organization later became the St. Louis War Chest Fund, the Community Chest, then the United Fund, and currently, the United Way. A fire destroyed three buildings at the camp in 1939. The loss was estimated at $20,000. 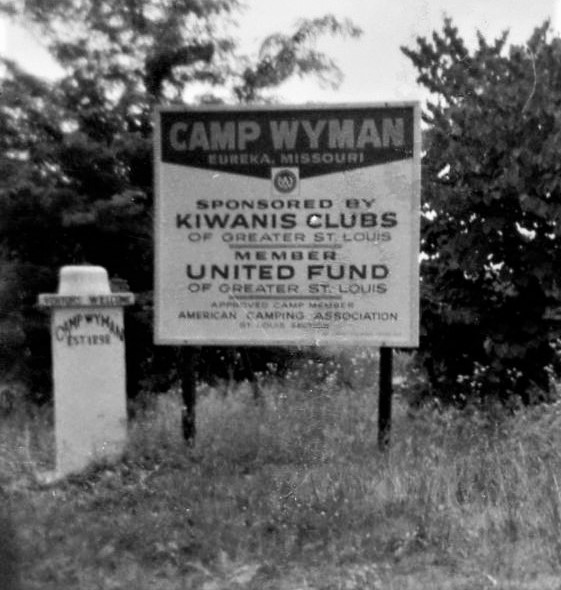 In In 1947, George W. Kirk of Sikeston Kiwanis was Governor. That year, Marq Braun, Chairman of the National Vinegar Co. and a member of the Southside Kiwanis Club, along with Harold Duffy, Executive Vice President to the S.G. Adams Printing and Stationary Co., and member of the Downtown Kiwanis Club (also chair of the local Kiwanis Interclub Relations Council), led the effort to enroll the Kiwanis Clubs of the St. Louis Region as sponsors of Camp Wyman. Some 1,200 Kiwanians agreed to pay $1/yr to the camp association. The MO-ARK History indicated that between 30 and 40 clubs in Greater St Louis (Divisions 6, 7, 8, 9 and 10) sponsored Kiwanis
Camp Wyman. By 1990, Kiwanis Camp Wyman was completing a $5MM capital campaign and operated with a budget of about $1.5MM per year.

In this era, Kiwanis clubs participated in numerous fundraisers for Camp Wyman. In 1959, a swimming pool was built with $35,000 from Downtown Kiwanis earned by selling fruitcakes. There was always a swimming pool. The first, made of tin caulked with tar was kept filled by a spring running in and out of it. This was replaced in the late 30’s, by a concrete pool that also straddled a creek. Neither early pool had chlorination or filter systems; they were man-made swimming holes. Emerging public health requirements necessitated the “modern” Downtown Kiwanis pool that opened in 1959. 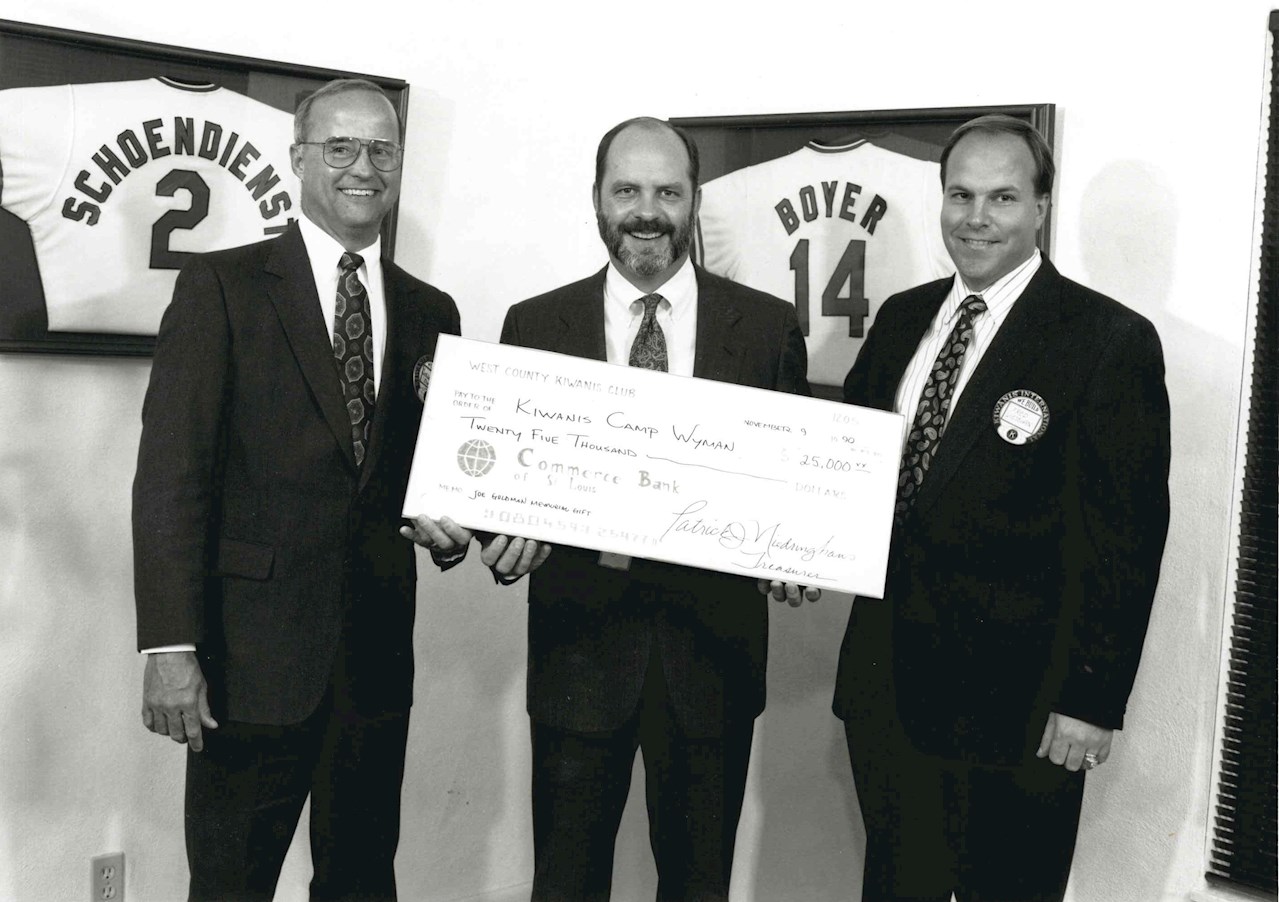 When Adj and Eddie Dillon were executive directors (from 1942 to 1975), it was not rare to see 300-400 Kiwanians and their families spread across the camp, paint brushes in hand on work day. As club members aged, participation diminished to a few dozen members who still faithfully come out each year. Annual work days were and remain a ritual.

Over the period from 1972 to 2000 all the old cabins were torn down replaced with modern facilities designed for year round use. Many of these were also funded by Kiwanis Clubs.

Wyman held outdoor education camps beginning in 1948 for public schools from St. Louis and Webster Groves as well as Lutheran parochial schools. Next year will mark 70 consecutive years the Webster Groves district will have been served at Kiwanis Camp Wyman. In 1953, Ed Kurmann of South (St. Louis) County Kiwanis went to camp for a week during Spring of the school year at Camp Wyman with his sixth grade class at Mallinckrodt School in St. Louis.

Judy Burnette also of the South County club worked at Camp Wyman as a
counselor. In 1958 and 59, she volunteered while a student at Harris Teacher College and later worked summers at Camp Wyman until 1973. During girls camp, she noticed visitors known as Sinawiks (Kiwanis spelled backwards), the Kiwanis Women’s Auxiliary. An end-of-the-season barbeque given by Kiwanis Club members was a tradition. It was a festive occasion enjoyed by all.

By the late 1980’s, Wyman’s data made it clear that a deeper engagement with young people was required to create true and lasting changes in their lives. Concurrently, local data showed that teenagers were most at risk and underserved. National research also reinforced Wyman’s belief that longer term engagement was needed to realize sustained improvement in the lives of young people.

In 1998, Wyman celebrated its 100th Anniversary. An article in the Post-Dispatch recognized Kiwanis efforts for its Kiwanis Camp Wyman. The camp and Wyman Center were headed by Dave Hilliard, who began as a camp counselor in 1965. He became President and CEO in 1975 and retired in 2016. Claire Wyneken, Wyman’s new President and CEO, began working at Wyman in 1987 and has been an instrumental leader in Wyman’s evolution.

In 2000, Wyman was asked by The Camp Coca-Cola Foundation (TCCCF) to assist in launching a camp-based national charity to be called Camp Coca-Cola Leadership Camps. Under an operating agreement, Wyman licensed its camp and community approach to TCCCF, agreed to operate the St Louis program as Camp Coca-Cola St Louis and became the start-up manager for development of new camps across the nation. Wyman helped open and operate camps in Boston, Austin, Atlanta and Los Angeles until TCCCF discontinued its relationships with the camps. TCCCF also relinquished its rights under the program license back to Wyman. During this time,
TCCCF contributed operating grants, paid fees and left an endowment to Wyman all of which totaled more than $10MM.

Wyman has leveraged that experience in several ways.

The program continues as Wyman’s Teen Leadership Program (TLP) and is offered to more than 350 teens annually from disadvantaged circumstances. TLP boosts teens’ tenacity through a six-year course of leadership experiences, and college access and persistence programming, which begin the summer after eighth grade. Wyman coaches help teens identify their values, talents and interests, and explore aligned career paths.

Teens participate in college tours, more than 40 hours of community service annually, and work with coaches to apply for college or other post-secondary options, and succeed in their paths after high school. Annually, 100 percent of TLP teens graduate high school on time, and enter post-secondary opportunities at rates higher than their national peers.

Wyman offers other programs, including

The Teen Outreach Program® (TOP®), which serves more than 22,200 youth each year through a National Network of partners. TOP empowers teens from sixth through twelfth grade with the tools and opportunities needed to build a foundation of healthy behaviors, life skills and a sense of purpose, and avoid risky behaviors that derail success.

InspireSTL, which provides more than 130 high-potential scholars from the City of St. Louis with rigorous academic preparation to help them graduate from four-year universities, and emerge as next-generation leaders.

Kiwanis clubs in the area continue to support Camp Wyman. Members participate in work days and serve on the Wyman advisory board. To this day, Kiwanians’ obituaries often request donations to Camp Wyman and Wyman’s endowed funds include a dozen or more testamentary estate gifts from Kiwanians or their families.